This is where Napier’s brilliance starts to shine.

Napier suggested not only labeling each column with a power two, but to also label each row this way too. A dot in any box is then given the value of the product of its column and row numbers. For example, one dot in this picture has value 64×32 =2048 and the other has value 4×4=16, and together they represent the number 2048+16=2064. One can thus represent very big numbers on this two-dimensional array. 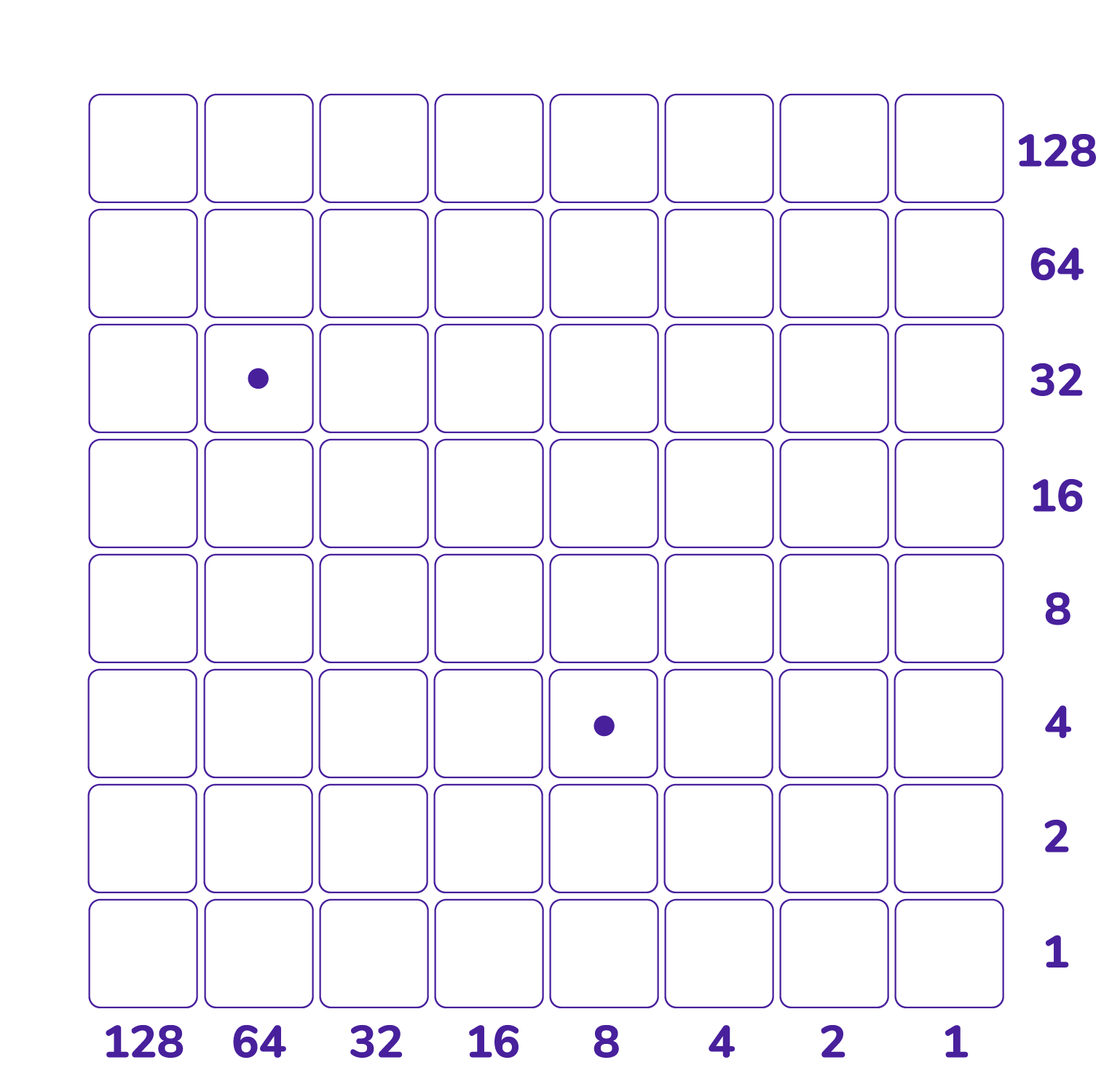 Moreover, not only does each row operate as its own 1←2 machine, each column now does too!

Any two dots in a cell can be erased—they explode, “kaboom”—and be replaced by one dot either one cell to their left or by one dot one cell above them, your choice!

One can also unexplode dots. 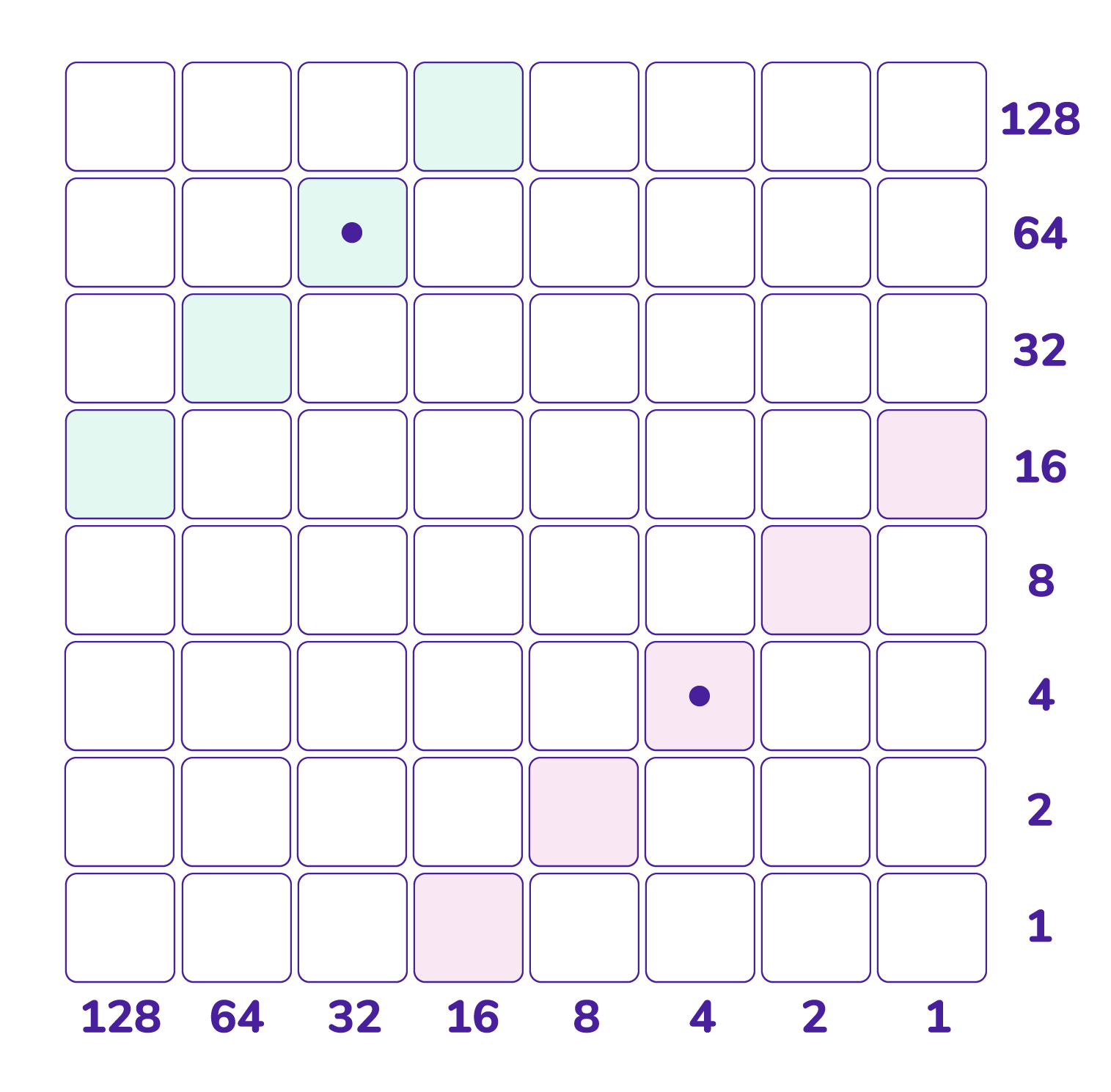 Napier noted too that you can slide a dot anywhere on the southwest diagonal on which it sits and not change its value and hence not the total value of several dots on in the grid either.

By placing dots in the grid we can represent large numbers, and by performing slides, explosions, and unexplosions we can change the representations of those numbers in lots of different—but always equivalent—ways. And with this power, Napier realized we can perform some sophisticated arithmetic!

Question: The dots in each each of these two boards have total value 80. (Check this!) 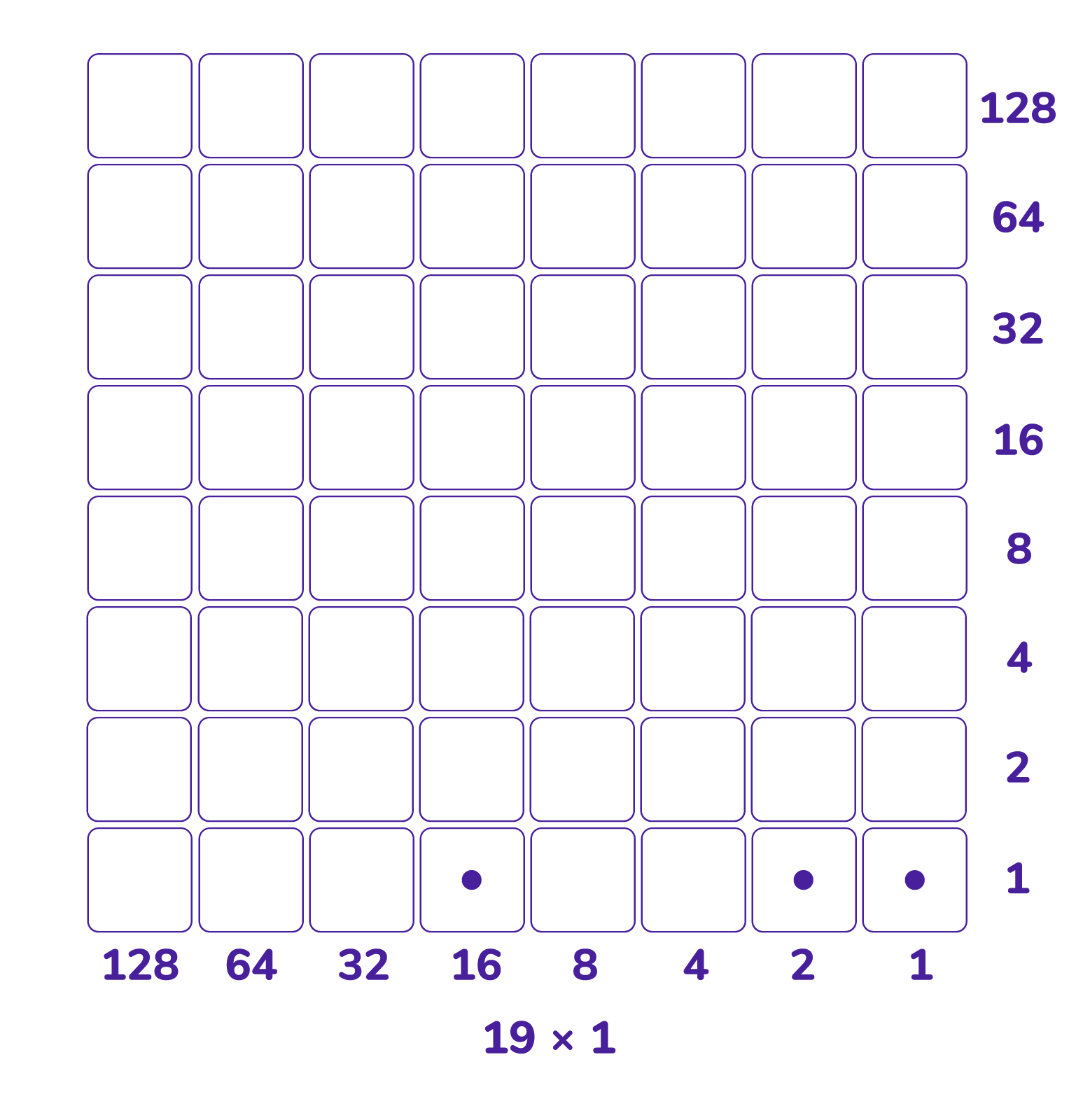 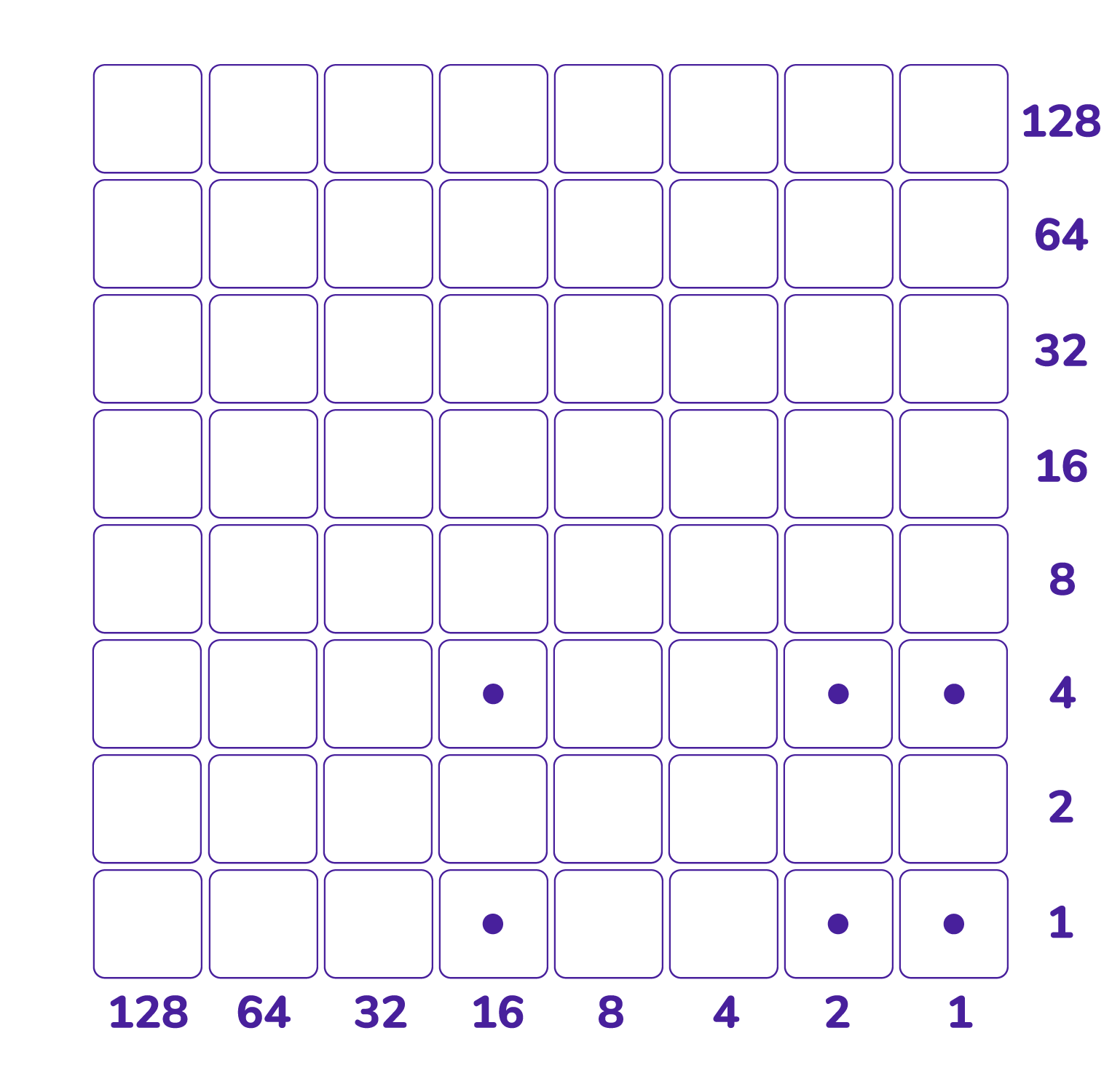 Slide each dot diagonally downward to the bottom row: this does not change the total value of the dots in the picture. The answer 95 appears. We’ve just conducted a multiplication computation! 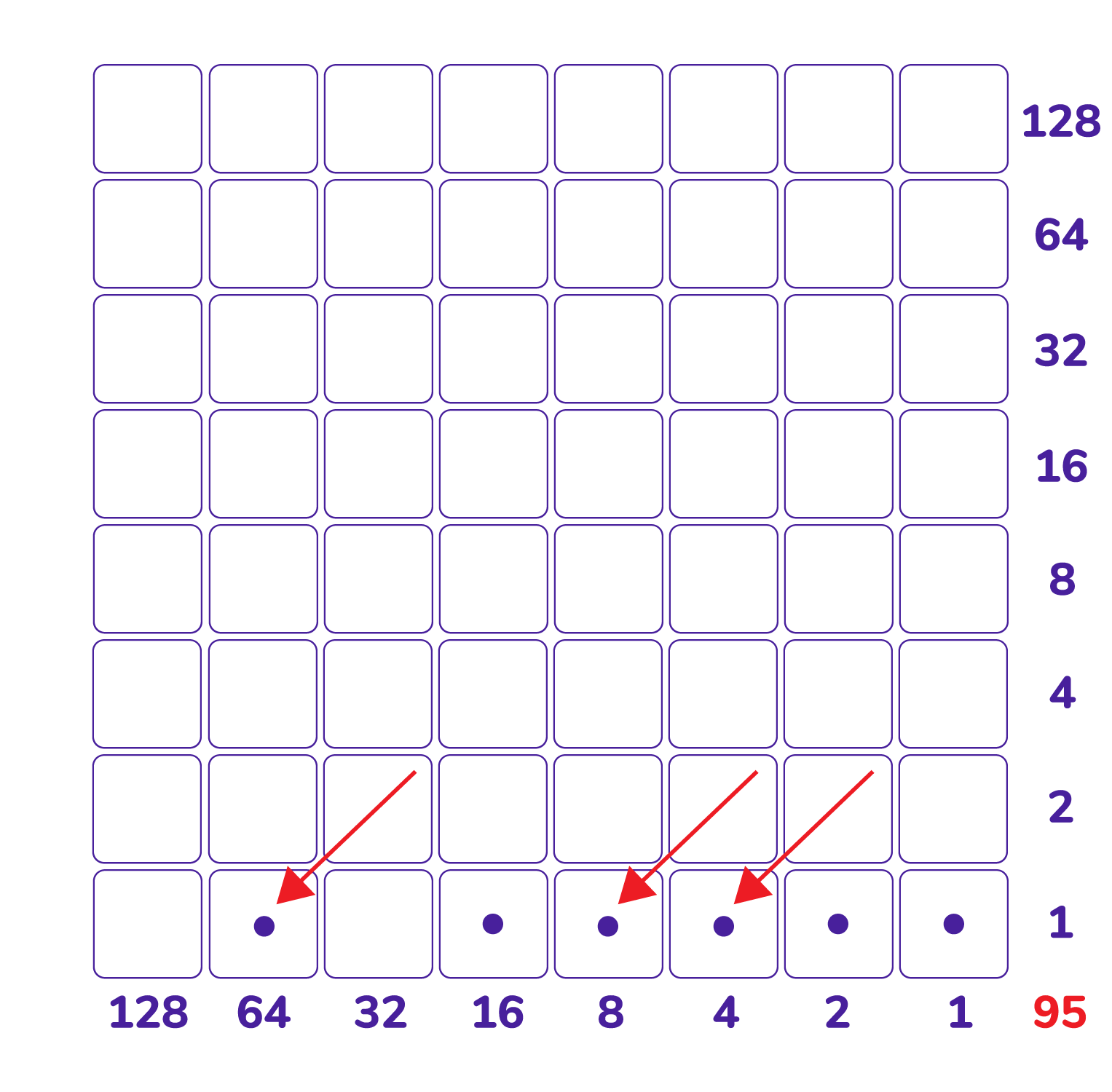 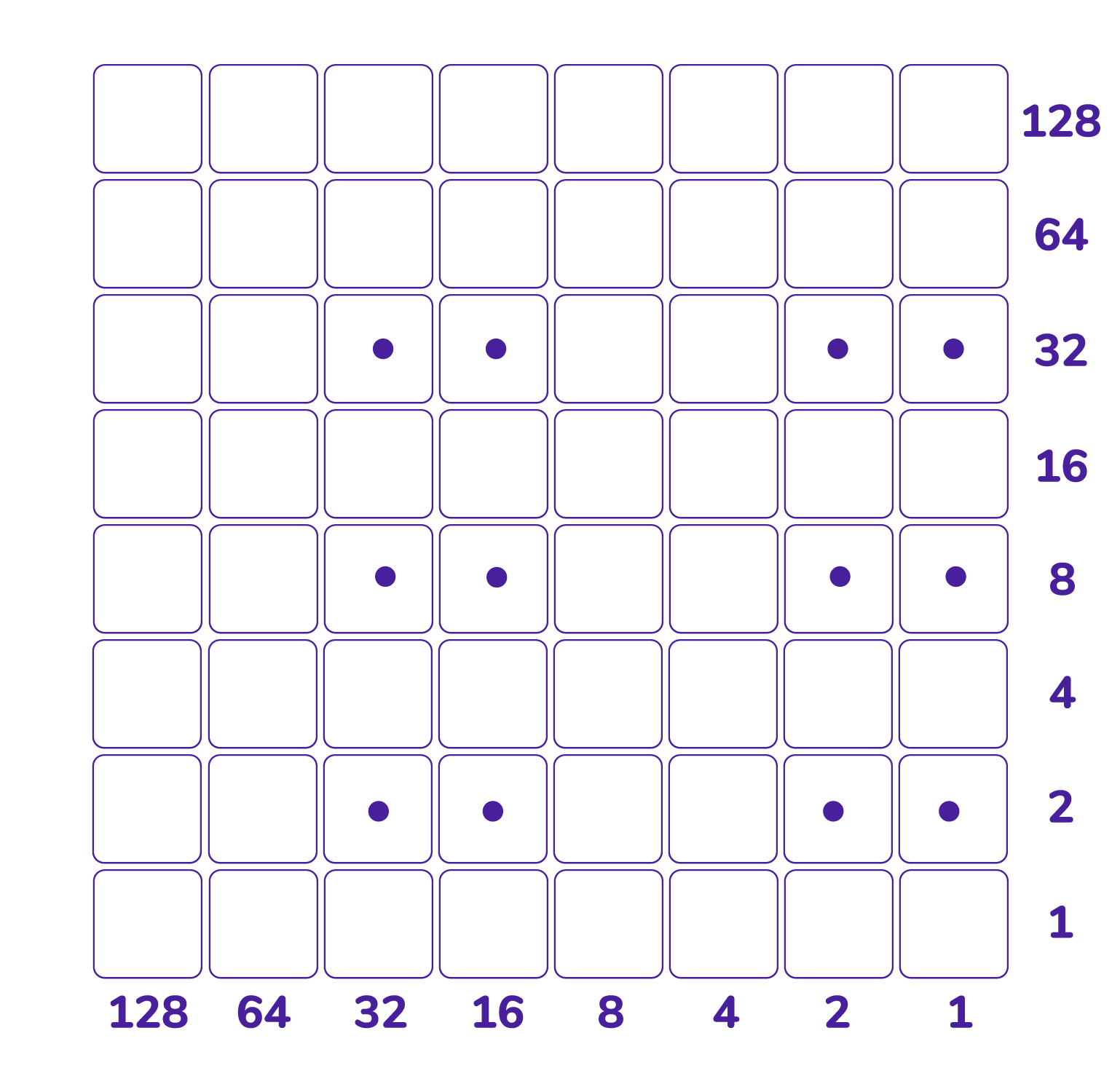 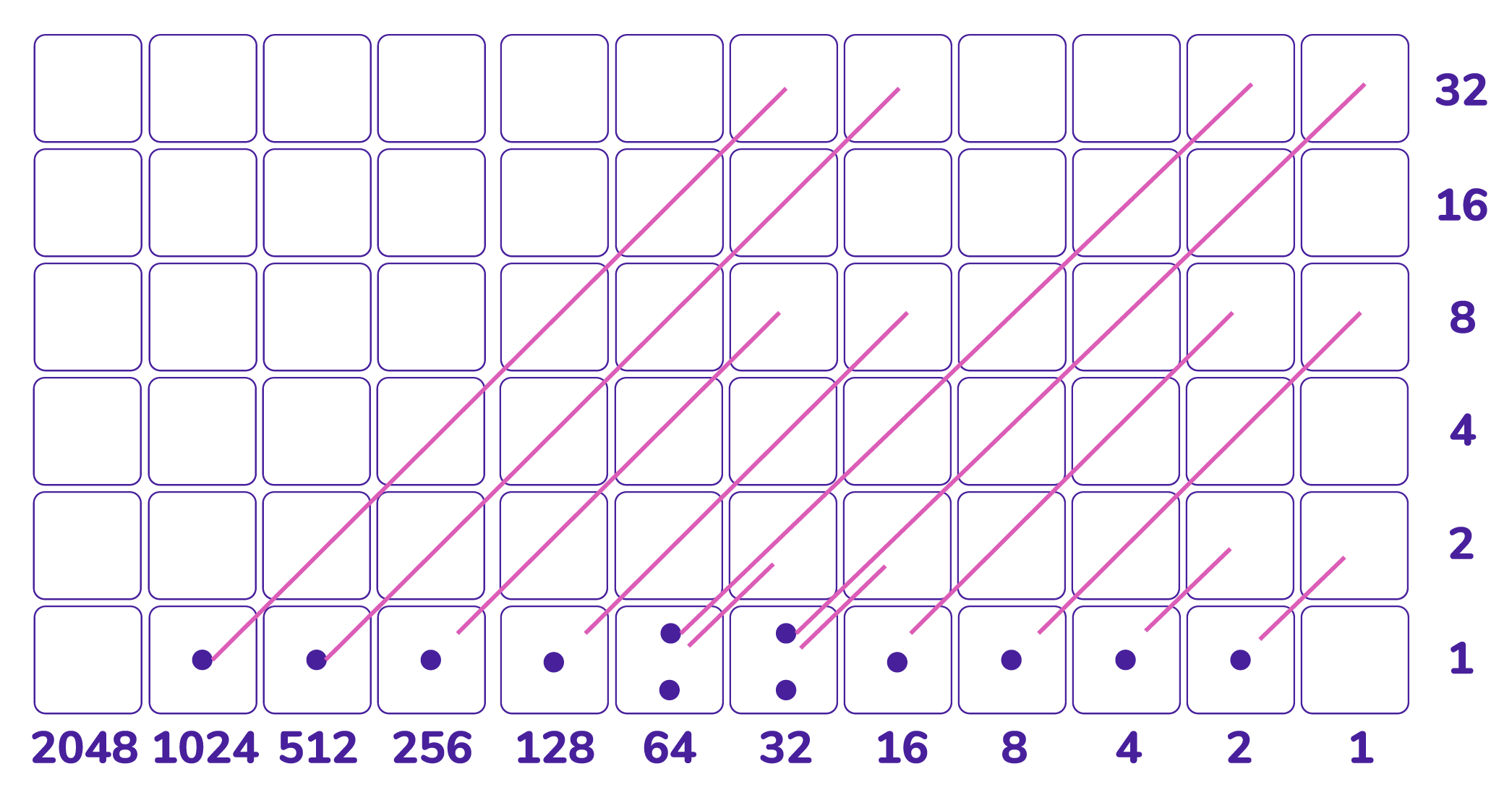 and the bottom row explodes to reveal the answer 2142.

Question: a) What product is represented in this checkerboard? What is the answer to the product? 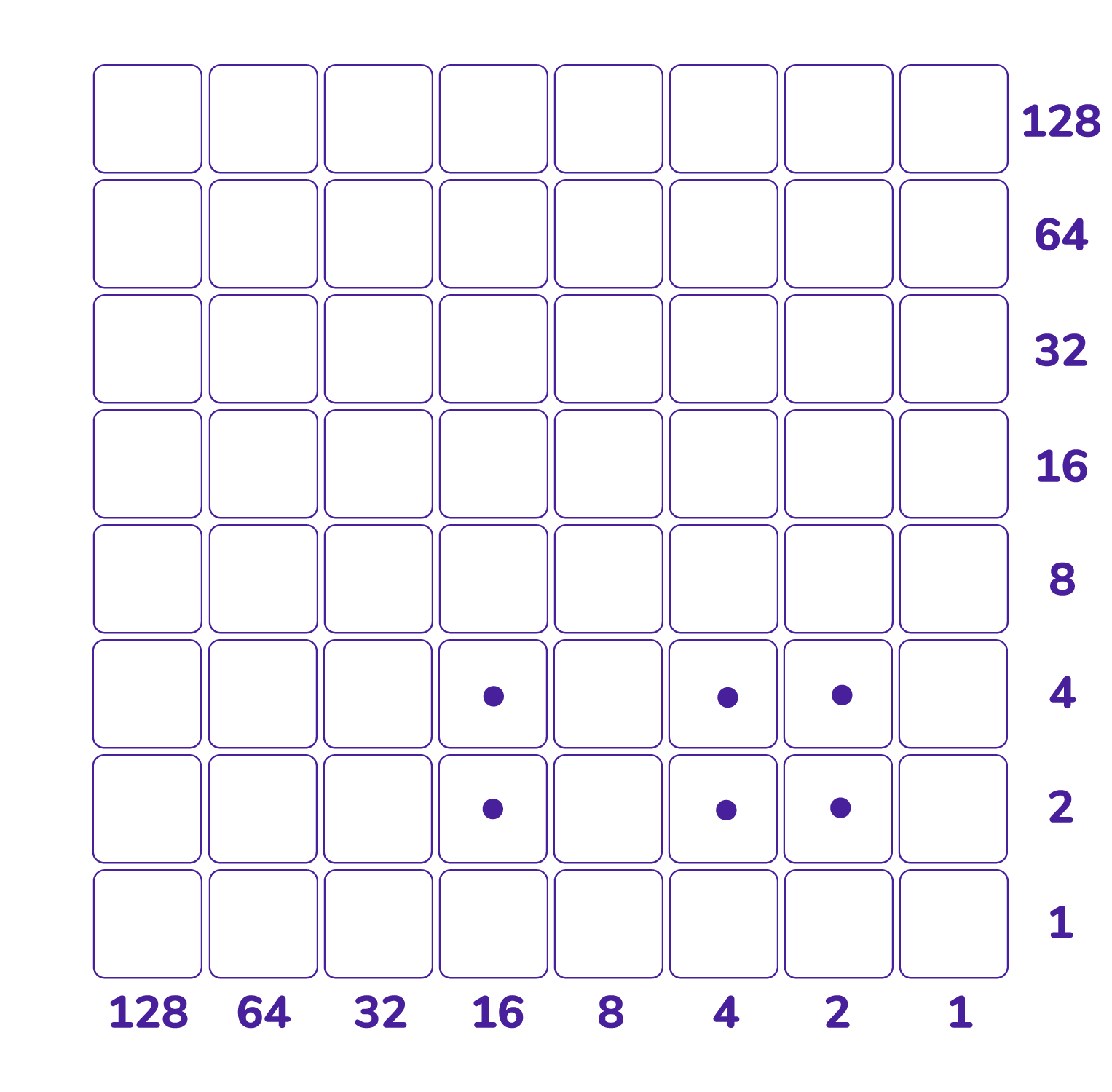 Question: Let’s do the multiplication backwards! Let’s see if we can compute 108÷9 and 65÷5 on the checkerboard.

a) Here’s the result of multiplying some number by 9 with Napier’s checkerboard. What number was multiplied by 9? Can you see the answer by sliding dots to recreate the original multiplication problem? 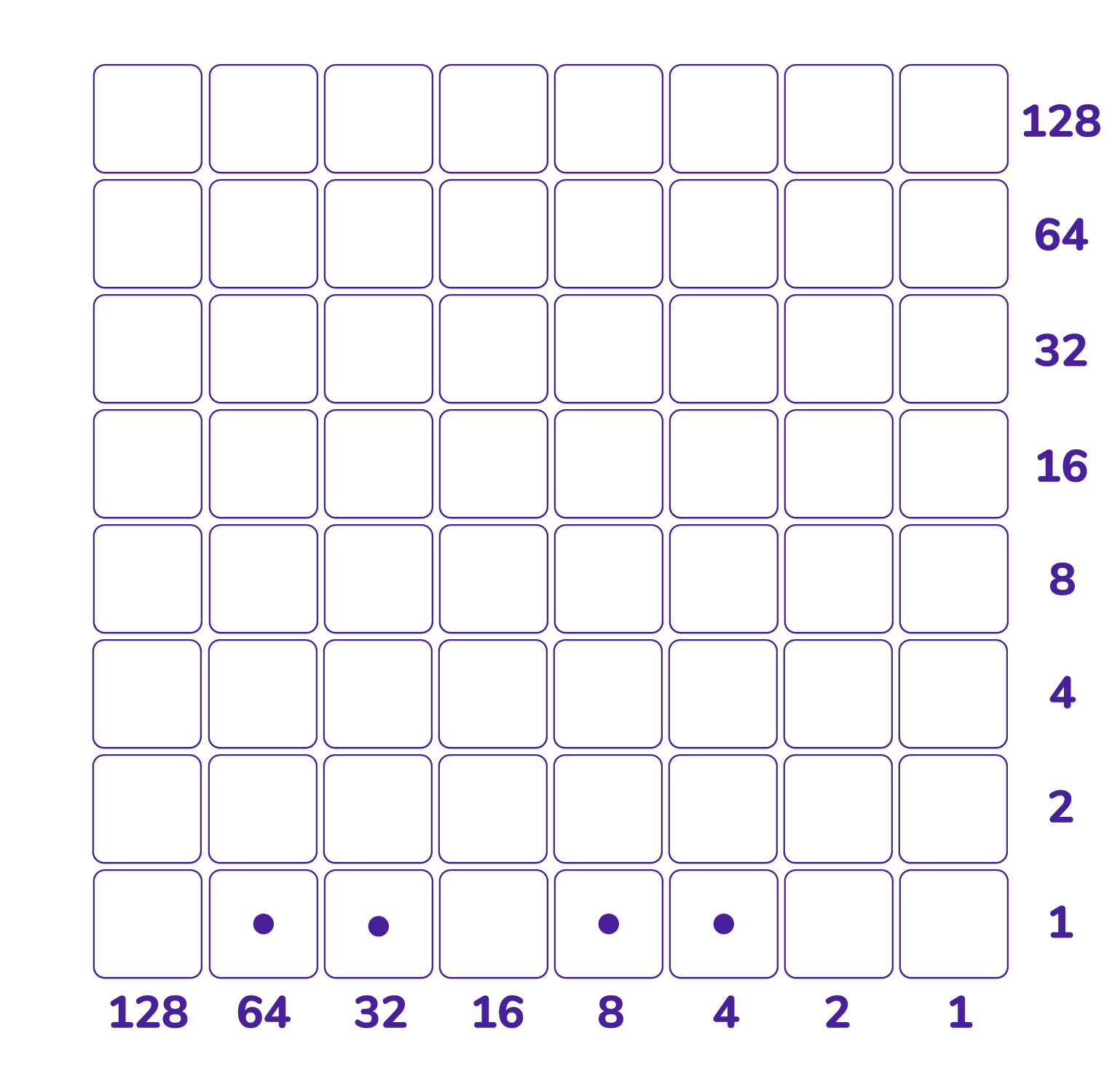 b) The result of multiplying some number by is 5 as 65 shown. Can you recreate the original multiplication problem by unexploding and sliding dots? 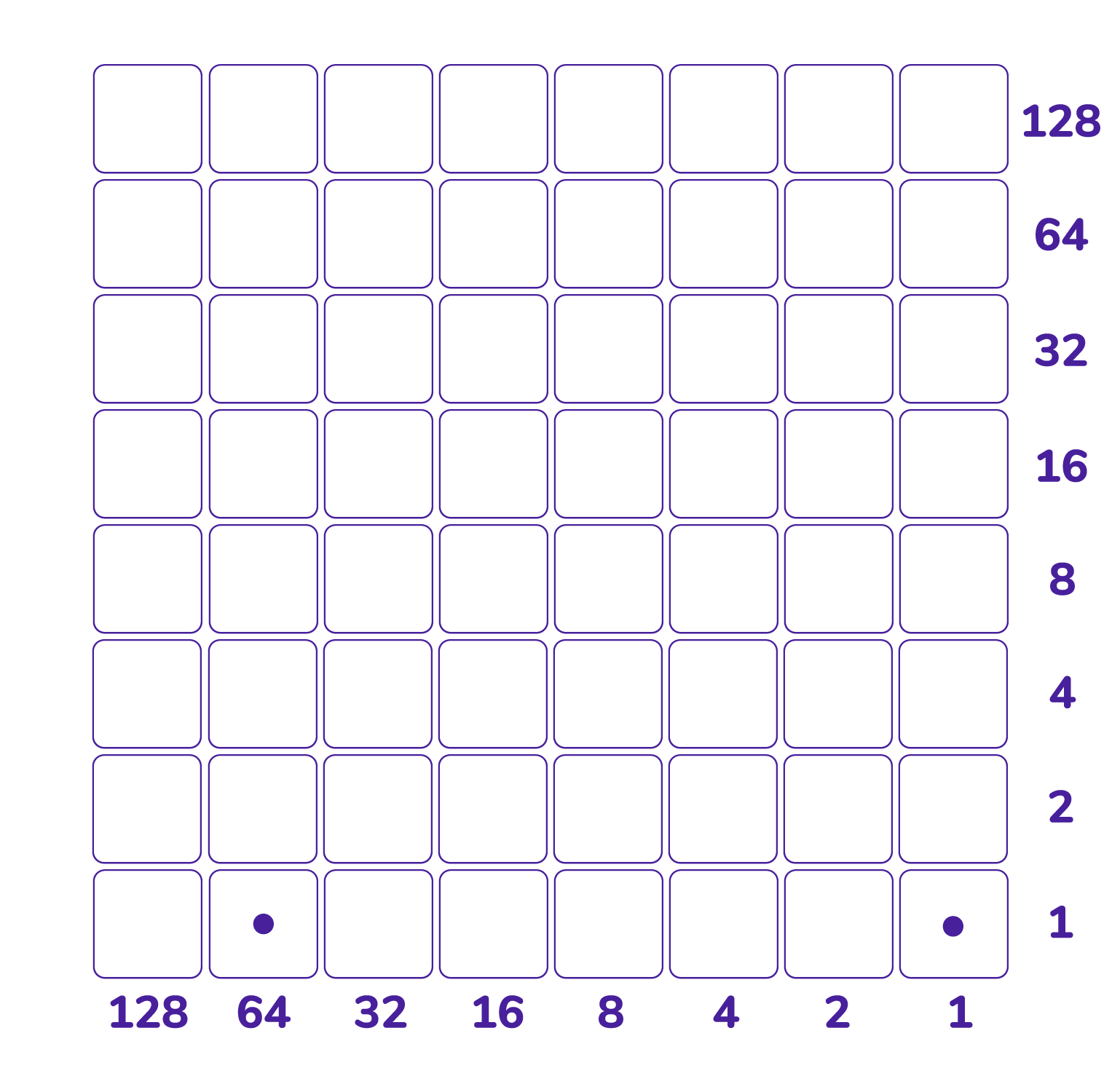 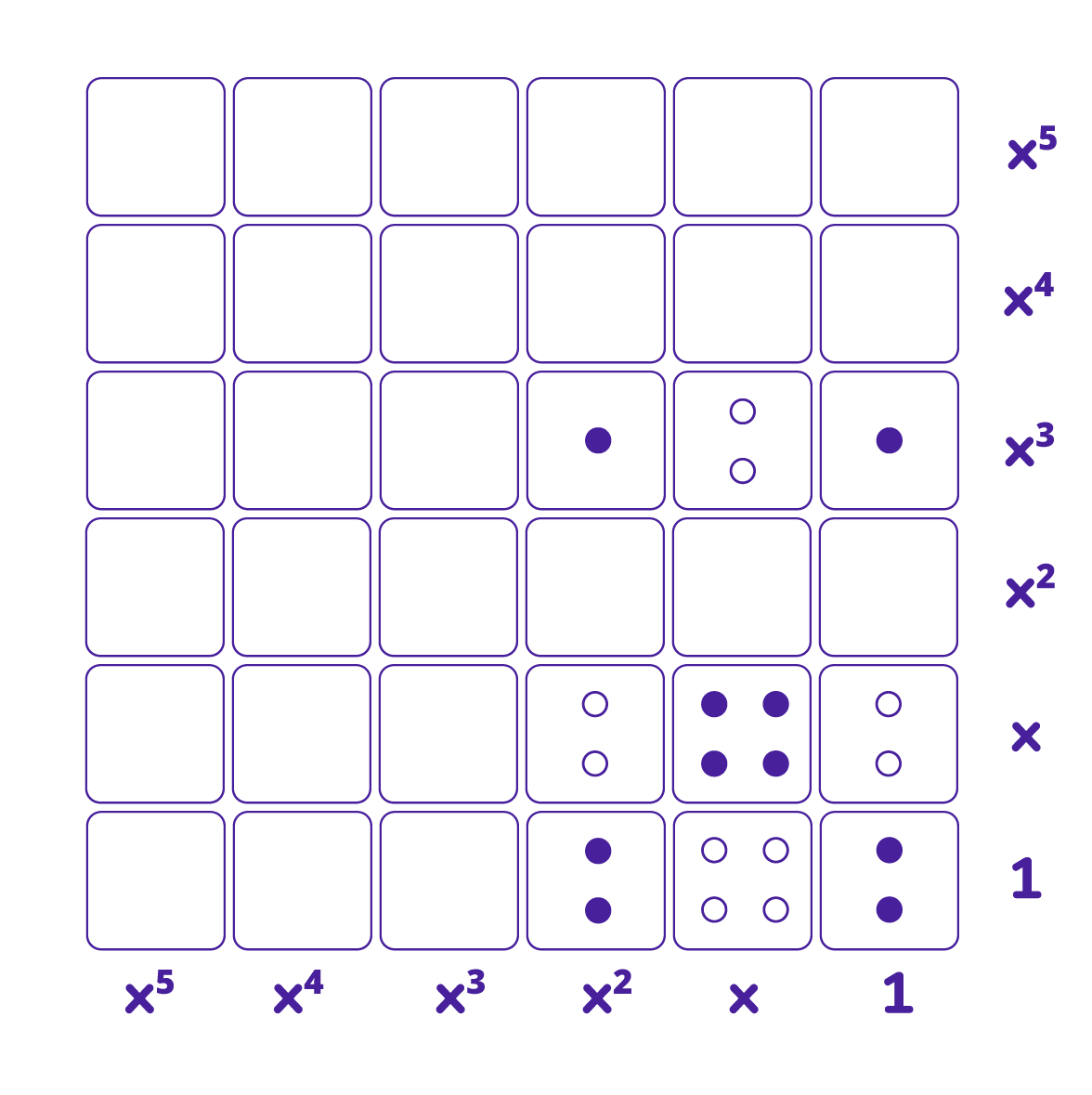